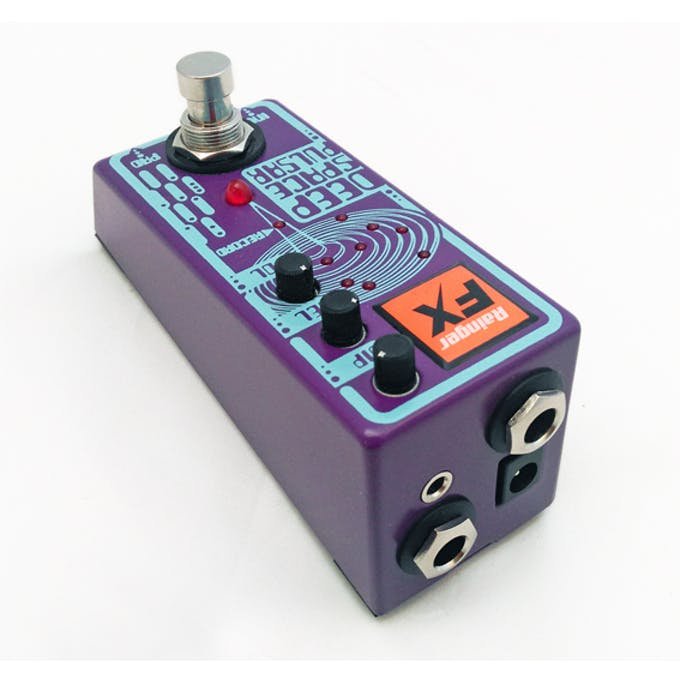 This is a sidechainer pedal, an effect that ducks your instrument’s signal each time it gets a trigger – capable of putting deep spaces into your sound!

NOTE: Audioclip includes some playing with other effects (fuzz, echo…).

It’s an effect that’s heard on many recordings, often subtly – like when a rock rhythm guitar is sidechained with the kick drum, so every time the kick drum hits, the guitar volume dips slightly for that instant – giving a really powerful overall effect… The guitar sounds pumping, or spring-loaded!
Or it’s sometimes used strongly, to make the signal completely disappear with each kick drum, as in big 4-on-the-floor club tunes. All we’re talking about is change in volume – the Deep Space Pulsar doesn’t affect your tone in any way, and sounds great with bass guitar!

Whatever way you use it, this sidechaining effect has NEVER been so easily available – and controllable – as with the Deep Space Pulsar! (Up to now, it’s always been an effect that’s added in post-production – hardly ever live).

It comes with a microphone; put that inside your drummer’s kick drum, plug it into the top end panel of the pedal and you’re ready to go! The pedal sits there waiting for the drummer to play….

The ‘Dip’ knob adjusts the amount of dip to the signal, ‘Rel’ controls the speed of the release; how quickly the sound rises back up, and ‘Vol’ is the volume – the pedal can go quite loud, more than compensating for any loss in overall level due to all the ducking. The LED display gives a visual indication of the amount and length of ducking.

However when instead you plug in the Igor pressure pad controller, the Deep Space Pulsar has tap tempo – a fully correctable facility – enabling it to work if you’re playing along to a DJ or drum machine. Two presses of the Igor programs a tempo (the ‘record’ LED coming on to show that the tempo is being recorded and it’s waiting for the second press), and at any point that tempo can be adjusted to bring it back into sync with the music, enabling the pulsing to stay in time for long periods.

Pressing on Igor for 1 second erases the tempo, for you to start again at a different tempo.

Or alternatively trigger it from a gate signal voltage! This needs a mono cable (sleeve 0V, tip signal), and each jump in voltage creates a ‘pulse’ in the pedal (like a single bass drum hit would).

There’s a ‘Pad’ button to alter the sensitivity of the microphone, and also an ‘Inv’ button to invert the whole effect; no sound is heard until the kick drum (or tap tempo) hits, when a pulse of signal is let through – introducing whole new kinds of sounds!

This is a revolutionary effect, designed specifically for those that play with other people – whether in bands, clubs or studios.