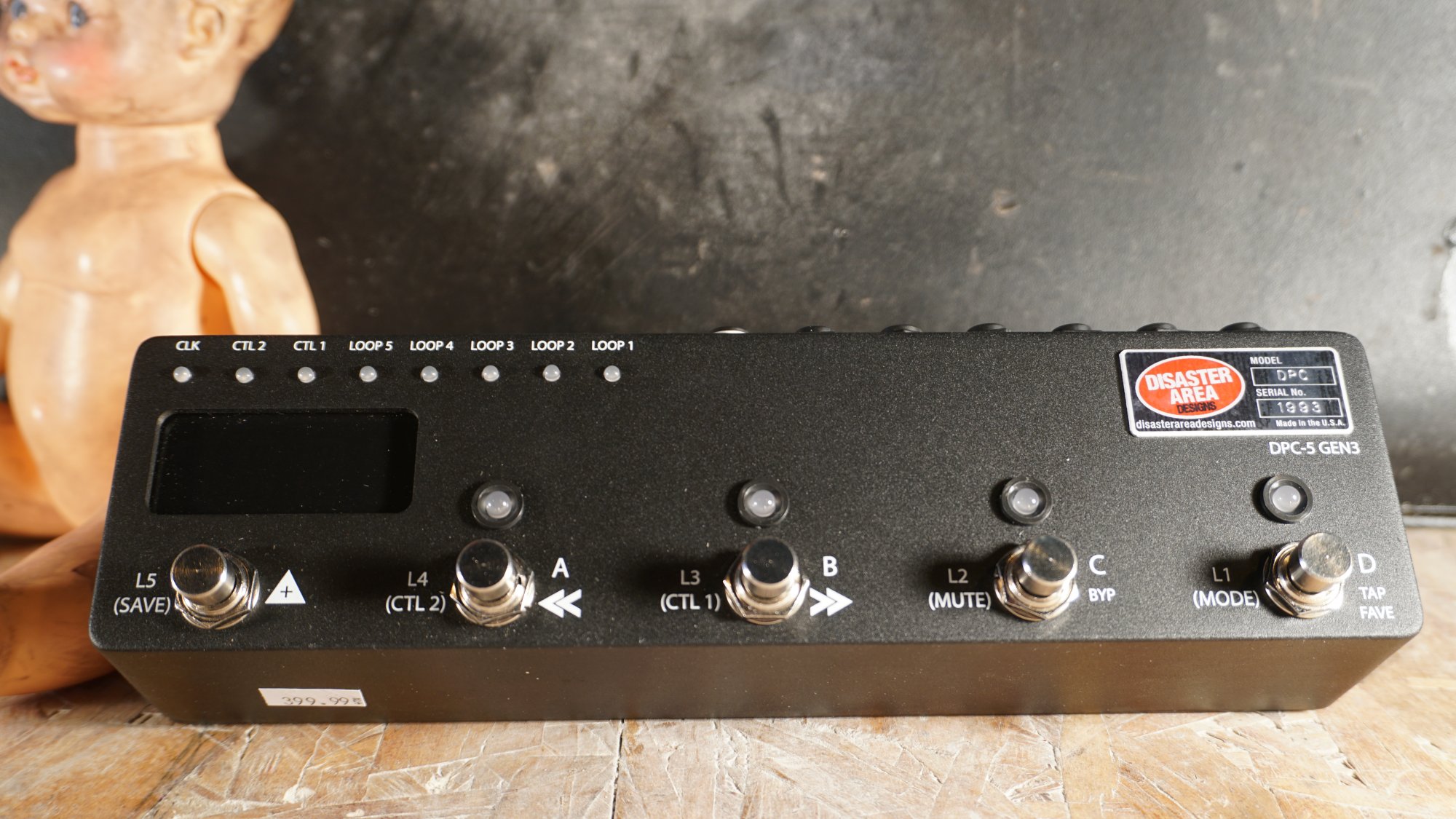 All DPC-5 Gen3 units are built to order, estimated shipping time is 1-2 weeks.

The DPC-5 was our first foray into the loop-switching field way back in 2012.  We discontinued it in early 2016 when some of the parts required to build them became too expensive.  We’ve been hard at work bringing the DMC Gen3 series to life, but we never forgot about the DPC-5!

What does it do? The DPC-5 is a compact MIDI controller and loop switcher.  It’s designed to control a mix of MIDI and non-MIDI pedals in your rig, allowing you to craft presets that you can engage instantly when you need them.  A single tap on your DPC-5 can turn up to five non-MIDI pedals on or off, send tap tempo to a delay or other device, change the channel on your amplifier, and switch programs on up to four MIDI devices.  That’s a lot of power in a small footprint!

More MIDI Control – Control up to four MIDI devices plus any combination of Disaster Area pedalboard switching systems.  Connect a DPC-8EZ as a MIDI slave for a 13-loop controller!

Preset Naming Capability – Each user bank and preset may be named.  This allows you to name a bank with a song title, and each preset with a section name (verse, chorus, solo, etc.)

Improved LED Indication and Display – The original DPC-5 had LEDs for each preset plus a multi-function cluster of LEDs to indicate various functions.  We’ve changed those LEDs to indicate the status of each loop, the control outputs, and the buffer / mute status.  We’ve also added our trademark blue LED display, with full alphanumeric capabilities!  Both display and LEDs may be dimmed or brightened in the setup menu to suit indoor or outdoor venues.

Silent Loop Switching – We’ve changed over the older mechanical relay bypass on the original DPC-5 to the quiet and reliable solid-state relay system from our popular DPC-8EZ.  The DPC-5 now uses less power and switches with even less noise than before.  We’ve added the user-selectable Automatic Noise Reduction from the 8EZ as well, allowing you to mute the controller briefly during switching to silence troublesome pedals.

Improved Audio Path and Buffers – We now run the audio path on its own power supply to improve headroom and reduce noise.

Built-in SMARTClock – The DPC-5 Gen3 adds in support for sending MIDI Clock or tap tempo to your connected devices, without any additional hardware.  The MultiJack connector can operate as an expression pedal inputs, tap tempo footswitch inputs, MIDI outputs, or isolated tap tempo outputs.  The DPC-5 Gen3 can send either a global tempo / BPM for all presets, or a new tempo / BPM for each preset.

Built-in SMARTSwitch – The DPC-5 has an isolated TRS (tip-ring-sleeve) jack that may be used for amplifier channel, tremolo, reverb, or other switching functions.  Connect it to your Red Remote compatible JHS pedals to have preset control over their switching functions, or control the Favorite settings on your Strymon pedald (requires the MJ-STT MultiJack TRS Tap Tempo Cable for Strymon.)  Or just use this jack to add TWO separate tap tempo outputs to the built-in SMARTClock!

Optional gHOST Compatiblity – The DPC-5 Gen3 can control an external USB-MIDI device including the popular Zoom MS-50G, MS-60B, and MS-70CDR using its native USB port.  Connect your USB-MIDI device to theDPC-5 Gen3 USB port through our gHOST adaptor, enable the USB Host mode in the firmware and you’re all set!  TheDPC-5 Gen3 can power most USB-MIDI devices, but please note that the power supply you’re using must be sufficient to power the DPC plus the connected device.  Powering a USB device may require as much as 500mA, so be sure your power supply can handle the load.

Separate Expression and Roller Configuration – hundreds of players all over the world are in love with the expression rollers on their DMC and DPC Gen2 controllers.  It’s a great way to add expression control without giving up valuable pedalboard real estate.  The DPC-5 Gen3 allows you to map the roller to a variety of destinations.

MultiJack – we’ve brought the MultiJack over from the SMARTClock, but we’ve taught it some new tricks!  The MultiJack can function as an expression pedal input, tap tempo footswitch input, or additional MIDI output by connecting the Disaster Area TRS to MIDI Adaptor Cable.  You can use our TRS Control Cable for Chase Bliss Audio to connect your Tonal Recall, Warped Vinyl or other Chase Bliss pedal for full MIDI control.  Want more?  Flip the DIP switches inside the pedal and the MultiJack can act as an isolated tap tempo output to your non-MIDI gear.  Any of the pedals listed over on the TNT or SMARTClock pages can be controlled by the MultiJack. The MultiJack also supports selectable tap tempo subdivisions, so you can tap in quarter notes and have your delay set to dotted eighths.

MIDI Input and Output – the 5-pin MIDI jack on theDPC-5 operates as a MIDI output, of course, but if you connect the Disaster Area MIDI Y-Cable, you can also send MIDI in to the DPC-5 Gen3.  Want to connect your old DMC Gen2 to your brand new Gen3?  No problem!  How about sending MIDI clock into your chain from a drum machine?  Sure, that’ll work.

Easy Firmware Update – no more driver installation, app downloads, or weird Windows errors!  Simply hold the bank up / save button and plug in your DPC, and it shows up on your desktop as a flash drive.  Drag and drop the new firmware over and you’re all set!  (Mac folks will have to type three keystrokes, but you can handle that!)  And our new 32-bit processor has more than eight times the available power of the Gen2 family.  We’ll be adding support for more devices and more features as you request them!

We’re glad you asked!  If you have one MIDI device, the DPC-5 Gen3 can simplify selecting programs, send it expression or tap tempo, or even keep it locked in to a MIDI clock.  We can also control the loop recorder / looper on several popular devices such as the Strymon Timeline, Eventide H9, and Line 6 M9 / M13.   Unlike the DMC-3XL and DMC-4 Gen3, the looper mode doesn’t occupy one of the device slots, so you can still get full control even with the looper mode enabled.

As helpful as the DPC-5 Gen3 is for single device users, it really shines when used with multiple pedals.  Instead of scrolling around on each device to select a program for your next song, the DMC can send simultaneous commands to all of your pedals to select the exact patches you want with a single tap!  Using our Preset Mode, changing sounds on all of your MIDI pedals is as easy as changing the channel on your TV remote.  The DPC-5Gen3 can control up to four separate devices.

And by adding our new Clock Mode, we’ve taken pedalboard control to a new level!  You can select your tempo by BPM, or tap in a new tempo any time.  The DPC-5 Gen3 allows for a global tempo that you can tap in at any time, or preset tempos that change along with your MIDI programs.  You can even configure the MultiJack to send taps to your non-MIDI devices with tap tempo inputs.

Wiring up your rig with a loop switcher like the DPC-5 Gen3 is a bit different than a traditional setup.  Instead of connecting the output of your first pedal to the input of your second pedal, you have to connect each pedal in your chain to its own loop on the DPC-5 Gen3.  You’ll need two cables per pedal that you want to connect, so that means ten cables to connect five pedals to the DPC-5.  We recommend our DisasterPlug cable kits due the tight spacing on the jack panel, but George L’s and Lava solderless plugs also work.  If you prefer to use soldered plugs, we recommend Switchcraft 280 short-handle straight plugs.

You’ll also need one MIDI cable for each device you want to connect to the DPC-5 Gen3.  MIDI is a communication protocol, and a single MIDI cable is capable of sending data to up to 16 different places on separate MIDI channels.  If you want to connect multiple MIDI devices together, you can generally hook the output of the first device (like the DPC) into the input of the second device, then the output of the second device runs into the input of the third device and so on.

Also, some devices that have a MIDI output do not pass incoming MIDI to it – the big offenders here are the Line 6 M5, M9, and M13.

Some devices have a MIDI output / thru but may not reliably pass incoming MIDI data – The Eventide Factor series and H9 are like this.

If you have these problematic devices, you can either place them LAST in your MIDI chain, or you can use a MIDI Thru box such as the Disaster Area PBA-MS which will send full MIDI to three separate devices without daisy-chaining them.

Chase Bliss:  Brothers, Warped Vinyl, Wombtone, Gravitas, Spectre, Tonal Recall, Ayahuasca (control up to 4 with an MIDIBox, control up to three pedal with our TRS Control Cable for Chase Bliss Audio and the MultiJacks)

Meris:  Mercury7, Ottobit Jr(control up to four Meris devices using MIDIBox, control a single pedal with a mono cable connected to the MultiJack)